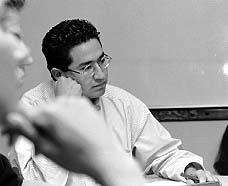 ASUA Undergraduate Sen. Sergio Jasso awaits the decision on whether he will be impeached. The Senate voted 5-1-2 against impeachment.

During the Feb. 28 meeting some senators said they were upset about Jasso's absences because it was in conflict with the new bylaw, which states that a senator can have five excused absences.

But this week senators seemed more understanding of these absences because they said they have heard Jasso's apologies and seen him in the Senate office a lot in the last week.

"The points (concerning missed absences) have been well taken and I think Sergio has apologized to all of us," Sen. Mindy McCollum said to senators at the Senate's weekly meeting in the Catalina Room at the University of Arizona.

The issue to impeach Jasso has been on the Senate's agenda for three weeks, and after reviewing bylaws and hearing from the senator, they took action last night.

At the Feb. 28 meeting, Jasso told the Senate he thinks there was a lack of communication about the absences because he called and told someone at the front desk whenever he missed a meeting or he left a message with Sen. Jonathan Bierner.

Bierner said at last week's meeting that he did get one of Jasso's messages, but did not get the other messages until after the meetings.

Feb. 28 Sen. McCollum said she did not understand how there could be a lack of communication because the Senate has its own phone line with an answering machine.

Sen. Jasso said he missed one meeting because he was sick with a high fever, one because of a traffic accident he was involved in, and three others that he said were excused because the meetings were on Friday.

He said he told the Senate when his term began that he wouldn't be able to attend Friday meetings because of his job.

Also at last night's meeting, head of the College Advisory Council Kirsten Ingebretsen, who has an honorary seat on the Senate, read her letter of resignation saying she is leaving the UA due to personal problems.